Just when you thought it was safe...

I was going to publish a half-written post about a very eerie trip to the British Consulate, but in the meantime, I woke up yesterday morning to scenes rather like this: 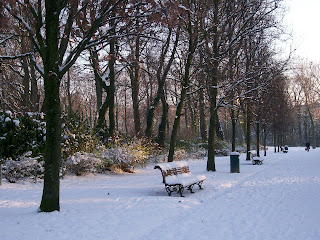 Normally I'm a big fan of snow, and the incontestable fact is that Brussels under snow is a far prettier and less doleful place than Brussels under drizzle, but this is starting to get ridiculous.

Yesterday morning I went to see a man about a pension policy (I know!!).
- oh you managed to get here all right then?
I must have looked surprised because he added:
- all the buses are cancelled.

Only... somewhere along the line I took the wrong road.

On the way back I missed the last metro and fell over twice on the packed snow slipping and sliding my way home down Rue de la Loi.

Next time we go out I'm going to draw you a map. You got even more lost than I initially realised...

it looks like a layer of two inches of snow, in the capital of Poland we have nine times more of this fluffy white substance, but here it's not a disaster

Laura it's ok - normally I do a printout from googlemaps, but for some reason I didn't manage it that time. I probably have an entire map of Brussels now, composed of googlemap printouts...

Bartek - yeah, I know, I know, Western Europe can't cope with snowfall, et cetera. Feel free to be entertained by our efforts!
Incidentally when I was in Krakow the other week all the Poles were complaining about the weather and how awful it was and how they'd never seen anything like it etc etc - although the buses were still running.