This is a bit like Noc Museów in Kraków, except that the wristband costs nine euros, instead of the token one złoty for a stamp.

Last year we played dressing up at the City of Brussels Museum on the Grand Place, then traipsed around a crowded costume museum before queueing 20 minutes to get into the Musical Instrument Museum for a swing dancing workshop.

This year, we stayed in Ixelles: the Ixelles Museum, which is currently hosting the works of Olivier Debré 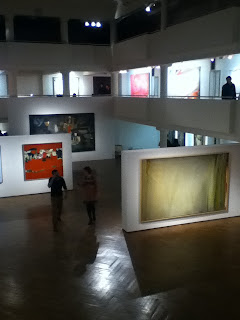 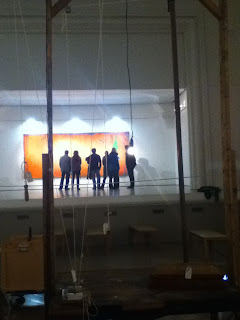 ... alongside its permanent collection. I'm not sure whether I'm allowed to show pictures of individual works or not but these tiny Rodin cherubs touched a chord. This is called 'Idylle d'Ixelles'. From this angle you can see how softly the little girl cherub is kissing the boy. Why is her arm in the air? Is she about to fly away on those tiny wings? Is he trying to catch her and pull her back down to earth? 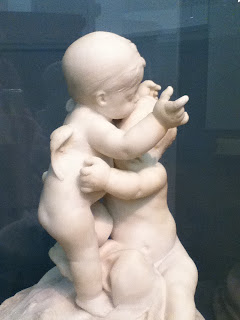 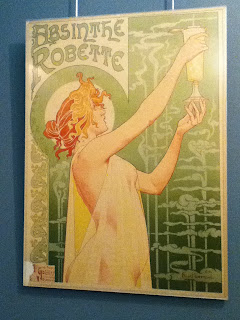 After a burger stop at Le Comptoir on Place St Boniface, we went to the dinosaur museum. Oh all right, the Natural History Museum, but it's basically all about the dinosaurs, right? 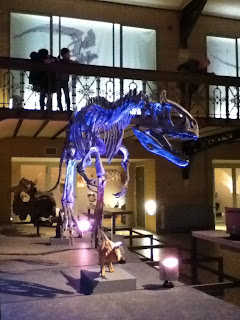 And then we trekked into town to finish the evening off with a beer on the top floor of MIM and to steal a few minutes on the dancefloor before chucking-out time...
Posted by pinolona 1 comment:

... et la neige fait son apparition...
said the taxi driver, wryly, as the car swooped in and out of the undulating tunnels of Brussels' inner ring road last night.
Later, I stood at the window (on the step stool, on tiptoe, with one foot balancing on the radiator - my windows are lunatic-asylum high) and watched the white flakes calmly falling through the dark of the deserted square. There's something soothing and healing about watching a gently incessant fall of snow: something magically reassuring, a sort of continuity in the universe.

I've made a bad start to the week with some spectacularly inept attempts at schmoozing (I tried to come up with something a bit more convincing than 'can I please have some cash to go and spend a few months mainlining tatankas with my mates in Pauza') and am trying to comfort myself by feeding my running-away fantasy on Skyscan.net. In my dreams, this would involve escaping to Venice incognito and getting a Saturday job in a flower shop, à la Pane e Tulipani (a Silvio Soldini film which goes by the catchy English title of 'Bread and Tulips'). In reality, it may well involve several afternoons watching films in a three-quarters empty Kino Pod Baranami and talking to strangers at bus stops in a desperate attempt to acquire vocabulary.

In the meantime, I am watching Homes under the Hammer and trying to work up the energy to go downstairs and buy some chocolate. I am plucking up the courage to check my bank account after a fairly typically irresponsible weekend with extra shopping (I need a new winter/spring jacket and a pair of black boots but invariably end up buying dresses and posh lipstick).
After last week's efforts with the washing machine hose, I'm now feeling confident enough to replace the broken loo seat upstairs. Soon Brico will be my second home.

And finally: here's a video that will appeal to anyone who has ever spent their afternoon off on hold to Mobistar.

I am sitting on the carpet, leaning up against a very tatty sofa, in a two-up, two-down semi in a student town, on a tiny estate five minutes from the main street (there are only three streets in the whole place), ten minutes from the sea. When you go outside the air is sharp and salty and takes your breath away. There is a gas fire in the hearth. We are watching 'Real Genius' (an 80s film about geeky physics students). There is wall-to-wall carpet, in some garish brown-and-beige pattern. Four boys live here, two New-Englanders and two Glaswegians. The flat is littered with mouldering sports kit and there is a strange shrine in one corner built out of used pizza boxes and beer cans. I am twenty-one, and utterly - unthinkingly - in love with the long-haired American boy that I have been going out with for a couple of months. Three girls - one of whom is me - also live here, unofficially. There is something festering in the kitchen sink which may once have been porridge. I have enough money in my savings account for the whole year. I feel stable, and content, and - possibly - happy, and am aware that at some point this will end and something else will begin, but not yet...