It's been ages since I wrote anything. So I should write. Since I live in a francophonic country - or at least a francophonic region of a tri(at least)lingual country, it should have distinct existential leanings.

Ever since I left Poland - the first time around - I've been looking for an angle for the blog. It's clearly not about a British expat learning Polish in Poland any more. It's about a British expat, who is (still) learning Polish, but in a different and equally strange country. But should it be about learning Polish? Or about coping with the surreal/endearing/at times utterly frustrating experience that is life in Belgium? Or about being a - more or less most of the time - single woman in her (very) early thirties (Bridget Jones-stylie)?

Someone I spend a lot of time with recently quoted at me: 'I don't want to be a character in a movie of your life'. But that's not why I write. It's not supposed to be a blow-by-blow description of my rather dull existence. I write a blog because I like to write, because I feel that I might be good at it, if I did it enough, and because I do a job which is challenging and interesting but - in theory - not creative and I want to be able to form something which is my own, and writing a blog is a series of exercises preparing for what one day might be an article, or a short story, or even a very modest novel. Maybe. One day.

But maybe it is all just vanity. Maybe this is just one more thing that I'm not good at - except that there's no-one around to tell me to pull my socks up.

It's October, so there is a lot of work, and for this I am grateful. I am living by the skin of my teeth: running to work in the mornings usually almost late (or almost on time), with messy hair and smudged mascara, looking like a cross between a dressed-up schoolgirl and a nervous breakdown waiting to happen. On days when I'm not working, I sprint across Brussels trying to organise appointments and administration and learning of various sorts. My fridge is more or less permanently empty and I need to borrow an electric drill to fix a mirror, a row of coat pegs and a Japanese print to the wall. My flat still looks as though I moved in yesterday and I still haven't bought a bed, or a dining table. Through the bathroom skylight, I can watch the sun rise while I shower in the morning. Occasionally my hormones short-circuit my brain and I spend the whole day thinking about babies, although I'm nowhere near responsible enough to look after one. I've managed to divide all my paperwork into 'in' and 'out', in two big piles on the coffee table. I'm secretly pleased my boyfriend is away at the moment, because I will be able to spend the whole weekend asleep, or being quietly and unashamedly crazy by myself, or out with friends, hoping to forget everything.

I love late autumn and winter for no reason: for the coolness and freshness and crispness of everything, even in the city. I'm happy to change my life for three months and run in the dark and drink mulled wine in the kitchen instead of cold beer on a terrace.

There we go. A whole post of 'I'. Selfish? Indulgent? And wrong for these reasons? You decide.
Posted by pinolona 9 comments:

I must have written a post with this title before. I'm sure I have. It's actually not rainy at all but brilliantly sunny, and has been for the past few days.

Here are some random observations about Monday, in no particular order.

- today I sat in a meeting almost entirely in English, German and - a surprise late entry - Polish, which I am fortunately not yet qualified to do. I switched the microphone on a grand total of once and thus escaped a quality control report due to scarcity of evidence.

- the fates were clearly on my side with the quality control thing because I had finally rolled into bed the night before at about 2am. Please don't think that this is because I had anything particularly exciting to do: I've simply discovered that having to climb up stairs to go to bed when you are even only slightly tired is hardly worth it when you could just doze on the sofa in front of BBC3. My evenings involve messing about on the interweb, tinkling away at the piano, flipping channels, occasionally doing something vaguely productive like reading a book or writing a blog post (rarely).

- I ran around the park three times instead of two (in the dark you can be tricked into thinking you haven't run as far) and had a bath for the first time in over a year. Please note that I have washed myself by other methods in the meantime. I reckon that since I'm here on my own and I've already cleaned the bath at least twice since I moved in* it's probably relatively hygienic. Also, I finally have a bathroom which has a window. I've always found it singularly dreary to sit in four inches of tepid, scummy water in a windowless box room, but the fact of being able to lie back and look up at the sunset reflecting off the clouds through the skylight is somehow much more appealing.

- I bought shoes. I can't decide whether I like them or not. I am fed up with the ubiquitous ballet pump slipping off my feet all the time so I bought some rather flimsy tan leather plimsoll-type things - as unlike a trainer as I could possibly find without risking toe cramps. I have not yet paid my accountant. Accountants, since I actually have two, one in Belgium and one in the UK. I owe money to both, but not as much as I would owe to the respective revenue and customs services if I did not pay an accountant to do it all for me.

- I am unable to organise a piss-up. It's meant to be at my home, not in a brewery, but since I live in Belgium I'm sure there must be a suitable brewery relatively near by. This is partly social ineptness, more than partly shyness and a large helping of anxiety, plus I don't really understand how these things work. Do people really want to come and drink wine at my flat? Do I have enough chairs? I certainly don't have enough wine glasses. If people don't have fun, is it my fault?

- I am in the throes of a crise sentimentale, which pretty unclear to both of us. I think at the moment it is back on, largely due to the soothing influence of gorgeous autumn sunshine for the whole weekend and a long, slightly hungover romantic walk in the woods. Maybe Belgium and its meteorology are on my side after all.

- I keep forgetting to water the plant. He gave it to me. I only have to water it once a week. The designated watering day is Wednesday and I keep missing it (Wednesday is an easy day to overlook, with all those other things going on to distract you, like Tuesday and Thursday). He says that this is ironically symbolic, or symbolically ironic, or something like that.

Right. Time to tackle those stairs.


*nearly two months ago, so not so good after all.
Posted by pinolona 1 comment:

Singing today, I realised what it is that gives evensong its melancholy edge. The dimly-lit chapel late on a Wednesday afternoon, the shadows drawing closer, the few hardy members of the austere Scottish congregation hugging their winter coats around them as the dark falls ever earlier and we slip into the gloomy tunnel that is November. The wind howls around the stone walls and sheets of rain dash against the windows.


Turn not thy servants empty away, for we have thee as our only hope


Defend us from all perils and dangers of this night


Save us, O Lord, while waking and guard us while sleeping


The night creeps closer and the candles flicker and sputter in the draft - an echo of the gale whipping up the waves outside.

Bare branches rattle against the panes, trees are stripped and contorted as though with grief.

At this time of year, we are alone - deep in the night we listen to breath coming in gasps and cannot reach out to comfort the sleeper. We are the wrong person in the wrong place at the wrong time and the dark is all around and winter is coming.
Posted by pinolona 2 comments:

The sofa has become the central focus of my indoor life. It's a good place to flop down and pass out after work, it's the best place to sit and eat breakfast in front of the BBC (actually the only place, since I don't have a proper dining table yet) and it also doubles as a handy filing cabinet and coat stand. 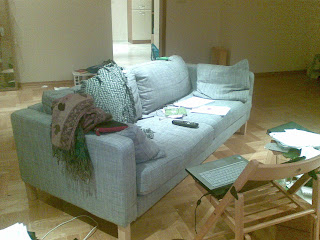 As you can see, there's still a little way to go on furnishing the flat. Currently life is full of boring adult responsibilities, such as trying to work out how to do last year's UK tax return. Since I'm not very responsible and have trouble remembering that I'm supposed to be an adult, this has been a bit difficult to take on board.

Instead, I've been exploring the various procrastination options. Such as cooking.


Here's my recipe for vegetable soup. Don't thank me now.


- scrape together all the leftover vegetables from the bottom of your fridge.
- cut and/or peel off the slimy bits.
- heat some oil in a pan and add garlic and lots of chilli (to hide the taste of the vegetables)
- add veg and pour stock over the top - preferably Oxo veggie stock, for that authentic Pot Noodle flavour
- turn up the heat, and go and watch ER on Vijf TV until you hear the saucepan lid rattling as the stock boils over.
- turn down the heat and leave to simmer until vegetables have lost all shape and consistency or until the Flemish news comes on
- turn the heat off, get out hand-held blender, and blitz until mushy.
- add a bit more stock to make it look more like soup and less like baby food
- add generous helpings of strong cheese.