I really have to do something about that fringe.

Email ThisBlogThis!Share to TwitterShare to FacebookShare to Pinterest
Labels: travel

I did mean to post a couple more Italy photos.
This lot starts halfway through the week in Bologna. Last time I went to visit Bologna was in between my exams when I was studying as an Erasmus student in Trento. It was afternoon, exam season in a student city, and all I remember are empty arcades, closed facades, and an all-pervading dusty orange-red haze.
I don't know anyone in Bologna, so I wrote to a very nice chap on Couchsurfing who agreed to host me, and I hoped that I would finally get to know the city a bit. I've heard good things.

I got a lovely air-conditioned intercity train from Florence at lunchtime.

On arrival in Bologna, all quiet and red. No reply from my couchsurfer, but then it was siesta hour.

I left my backpack at the station and set to wandering the streets aimlessly and waiting for gelato time. Most of the shop fronts were masked by heavy metal blinds, paper notes fluttering, bearing variations on 'Closed for the holidays'. I took some pictures of the deserted arcades and settled down with my giallo to wait for the bookstores to re-open.

No word from couchsurfer guy.

At around six, having successfully raided the bookshop and gelateria and picked up my bag from the station, and after continued silence from Couchsurfer Guy, I decided to check into the youth hostel. There is only one youth hostel in Bologna, and you have to take the 94 bus from Via Marconi.

Guess what? It turns out that the Via Marconi bus stop is podwójny. Actually there were about six different bus stops labelled Via Marconi, and only two of them were actually on the street in question.
Two bus drivers were leaning on an empty parked bus, smoking. I approached them and asked for the youth hostel.

Frowning and scratching of heads.

In August, in Italy, the buses run at one an hour. At least I think that's how it works. According to the timetable, services marked with a letter 'a' run as Saturday service, those marked with an 's' run as on Sunday, those marked with a 'z' run as if on a bank holiday and anything else apparently doesn't run at all.

Eventually they advised me to get number 20 from the stop two streets up.
I started walking, saw the bus overtake me, and started to run, backpack, Italian August heat and all.

Ahead of me I saw my one bus an hour start to pull away from the stop.... and then halt at the traffic lights.

I gained the front doors and banged on them furiously. They opened and I leapt on, gasping like a fish out of water.

- To the youth hostel?? I spluttered.
- First say thank you.
Said the bus driver.
- What?!
- Say thank you! For stopping the bus for you!
- Oh. Sure! Thanks, grazie mille! Now about that youth hostel...

Unfortunately the youth hostel was one of those wholesome International Hostelling Association ones. You know the type: capacity for at least 700 scouts, board games in the common room, table tennis outside, complete and utter lack of alcoholic beverages.
In the middle of absolutely nowhere.
The bus stopped three stops before and I had to walk the rest of the way, along the main road, in the heat and dust, with my backpack. No-one offered me a lift.

- Is there anywhere I can get something to eat here? I asked the girl at reception.
- Well... she said ... there's a supermarket three bus stops away, but you've just missed the bus. You could walk...
Seeing my dark look she moved swiftly on.
- Unfortunately the restaurant next door is closed for the holidays. But you could always order pizza.
I took the menu.
- Do you want me to call for you from here? she asked.
- Don't worry about it.
- No, really, I want to ask them something too.
I listened to her on the telephone:
- ... and... I don't suppose there's a tobacconist near you? There is?! Oh... closed for the holidays. I see. Never mind.
Poor woman, stuck in the middle of nowhere, not even a cigarette break in sight... 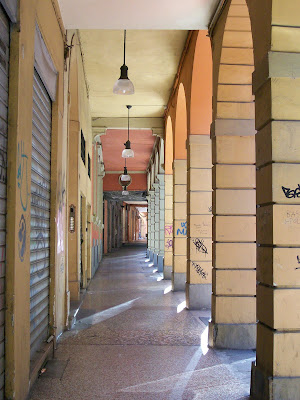 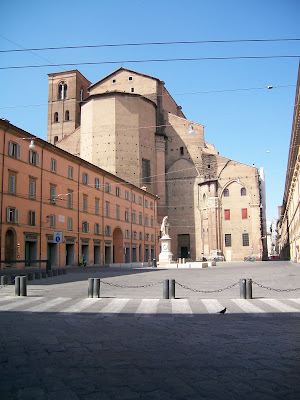 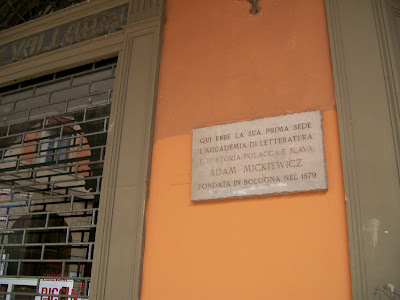 Gets about a bit, this Mickiewicz chap 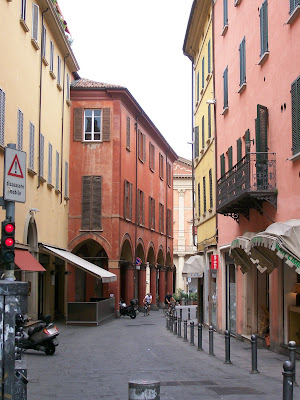 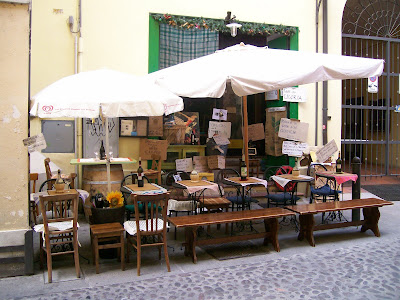 My first proper holiday in quite a while and I really don't know where to start.

Let's do it in two parts, shall we?

The trouble with Italy is that it's not simply one country but rather a cluster of separate little universes, each with its own distinctive character and culture.
Italians - most unhelpfully - don't even actually speak Italian. They speak Fiorentino, or Romano, or Napoletano, or Siciliano, or Nonès, or Sardo, e cosi via. Some of them even speak German, just to keep us guessing. According to Lepschy and Lepschy, the only word they can all agree on is espresso.
I tend to be easily bored, so perhaps that's why I love visiting Italy so much.

I only had a week to spare so I made a whistle-stop tour of some old haunts in the central and northern regions of the country. We'll start with the centre and then I'll post the other half domani, domani... 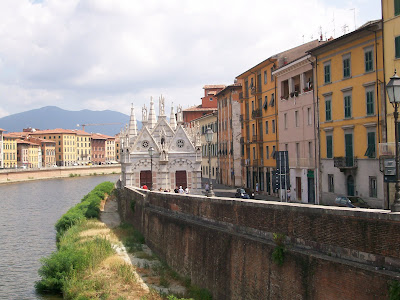 Plenty of other things to see in Pisa 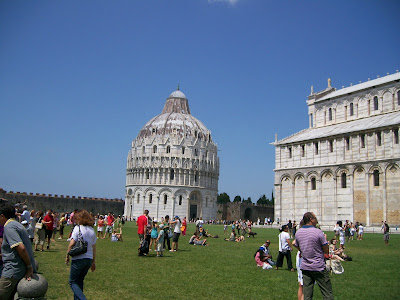 Look, it's all kind of wonky 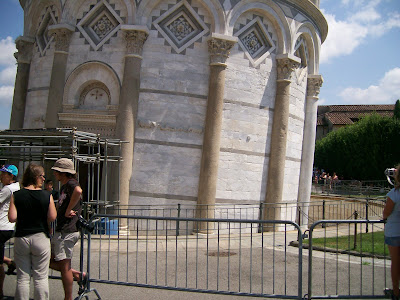 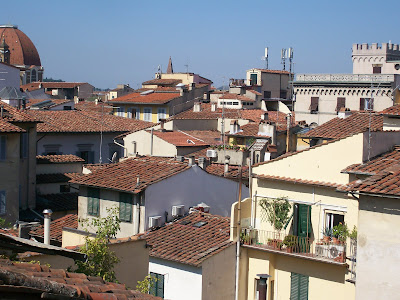 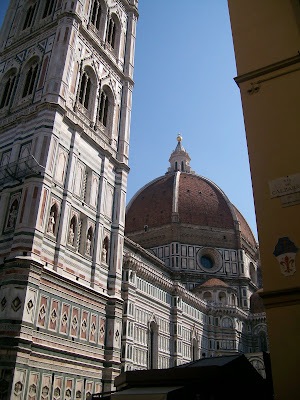 The Duomo, playing hide and seek 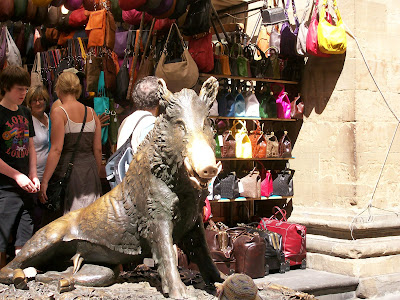 The Porcellino protects his merchandise 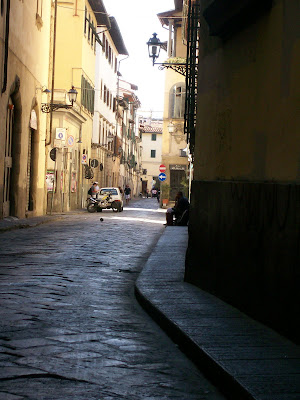 A quiet moment in a side street 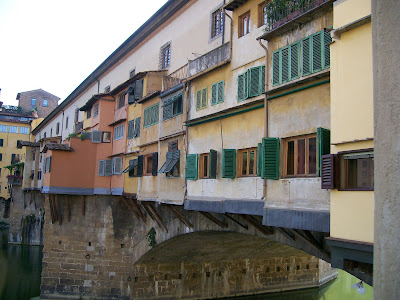 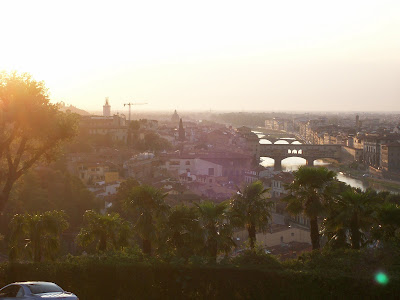 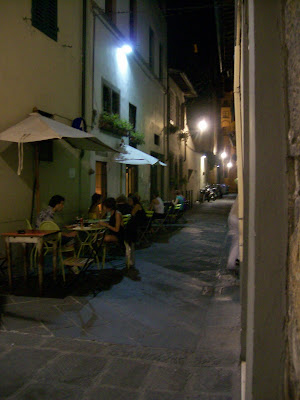 Weird things about being back in the UK. Again.

Swine flu: Have I missed something? In Poland they also have swine flu. But in Poland people do not wear face masks on the plane.
Equally bizarre is the state-of-emergency behaviour observed on going to church with my parents this morning: bottles of alcoholic hand sanitizer replace the traditional holy water at the threshold, while an awkward silence replaces the usual hand-shaking at the peace greeting. There is no communion wine, and there are special instructions on how to receive the wafers, with one hand over the other and Absolutely Not directly in the mouth. In addition, small plastic bags in which to place dirty tissues before discarding them wait at the ends of the aisles.

As far as I could tell, no-one appeared in the least sick: not even a squeak of a muffled sneeze (apart from me - but that was probably the flowers). I have yet to meet anyone with swine flu, or indeed to see any evidence of an epidemic. In addition, swine flu is notorious for affecting the young: since we're talking about the Church of England here, I hardly think the risk is that great.

Besides which, a Brit who's worried about shaking hands in church or breathing in recycled air on the plane isn't going to think twice about trying on publicly-accessible clothes in the shopping centre, not to mention tasting their friends' cocktails in the pub, or dancing the night away in some sweaty nightclub.

This is a strange place.
Posted by pinolona 6 comments:

Here are some pictures of the neighbourhood that has been my home for the past six months: 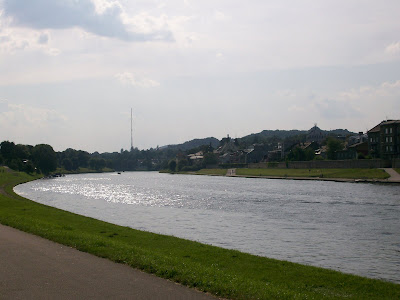 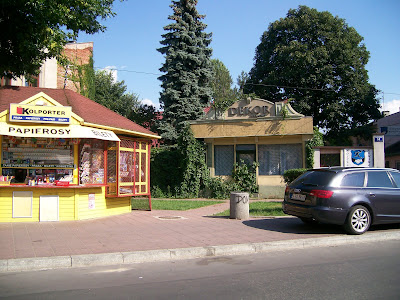 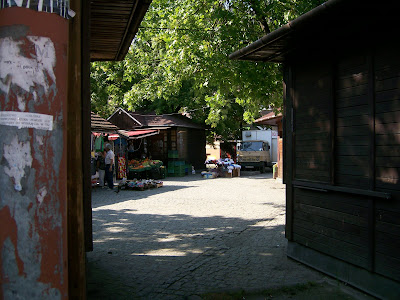 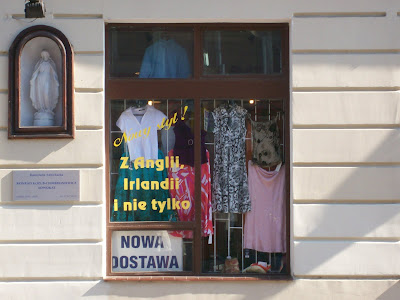 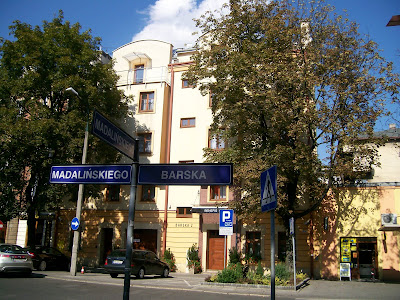 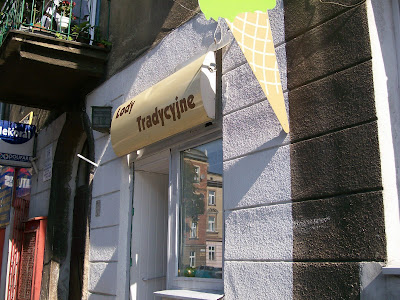 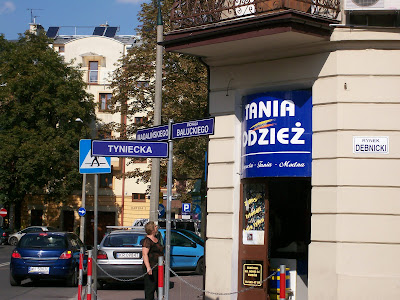 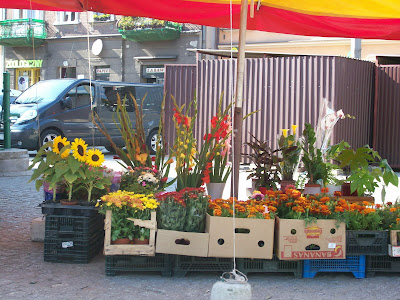 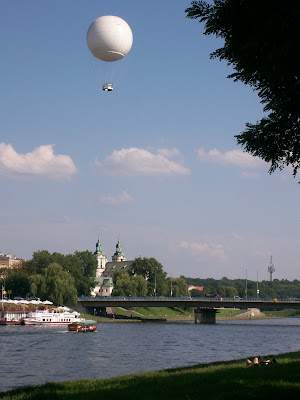