I think someone may be interfering with my blog: I had three spam comments about online gambling on the last post and my stats show an abnormal surge in popularity in India (home of the cheap IT department). I'm switching moderation on for the moment. Anyone got any other tips?
Posted by pinolona 4 comments: 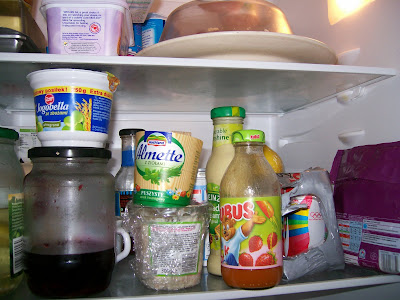 Polish products invading my parents' fridge.
Not only did the guy in the shop speak to me In Polish, he even asked me if I had change!

I know, I know, I haven't written for a long time (and my stats are starting to show it).

While I ponder the purpose of my own existence (if I do actually exist and it's not just memory cells playing tricks on me) and - more importantly - the future of this blog, here are some pictures of Sevenoaks (in case you were wondering): 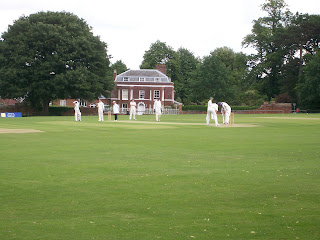 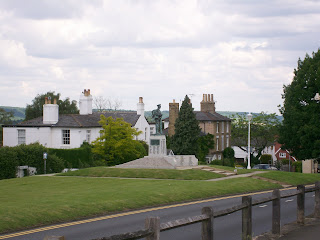 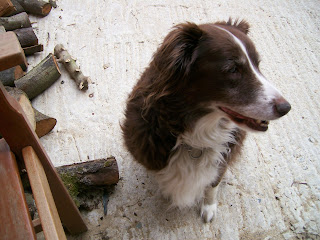 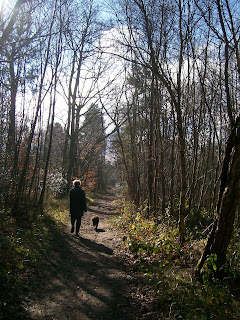 Email ThisBlogThis!Share to TwitterShare to FacebookShare to Pinterest
Labels: Sevenoaks, The Other Dog

Big Brother. It's still going. For the two hundredth season. Yes folks, that's right, in 1808, twelve people selected at random were thrown together in a house for eight weeks in the hope that they would get it on in front of the cameras.

Apparently, some people still watch it, rather than switching the TV off for an hour at 9pm (or changing to BBC, which is not really an improvement these days).

Being in the Big Brother house is rather like living in a student flat in Poland.

No, hear me out: all the girls live in one room, all the boys live piled up in another. The bathroom door doesn't shut properly. Everyone hoards toilet paper. It is impossible to calculate the number of actual occupants (x = y [occupants] + boyfriend A + cousin B - flatmate a(b)/c * PI r squared...). The furniture is made of MDF or plywood. However tight your budget, there's always money for alcohol.

Welcoom to the Big Broover Hoose. Sixteen housemates, one bathroom. Who goes? YOU decide...

Day 1
The housemates arrive. A massive party ensues. Nine bottles of vodka and forty cans of Tyskie are consumed and the fridge is left full of mysterious liqueurs which may or may not have been brewed in dziadek's shed.

Day 2
Housemates A and D (girls) get up early, clean up, and spend the rest of the day looking self-righteous. At 2pm, the boys wake up and sit on the sofa, drinking the remaining beer.

Day 3
A random new housemate arrives. Rumour has it that he is Agnieszka's second cousin, but this remains unconfirmed. The housemates set up an extra mattress in the boys' room.

Day 4
Term has begun in the Structural Design faculty, and the first task has been awarded to one of the housemates: create an interior space with two staircases meeting on a mezzanine floor. Model this in cardboard.
08.55: Housemate D enters kitchen, with cardboard model of room.
08.59: Kettle boils: housemate D -who has been up all night - adds two drops of hot water to 20 grams of instant coffee.
11.20: Housemate A enters kitchen. Housemates D and A hold intense discussion for several minutes. Housemate A takes hold of model, twists it several ways, scratches head, sits down.
11.23: Housemate A makes more coffee.
13.14: Housemates B and C (boys) enter kitchen in underpants. Housemate B takes beer from fridge. They greet A and D, still at the table. More discussion. Housemate C takes the cardboard model.
...
21.53: There are now nine people in the kitchen. The cardboard model is beginning to look rather the worse for wear. Housemate E (female) enters with Boyfriend A. They greet D. Boyfriend A sits on floor and begins to twist cardboard model.
21.58: Housemate A mixes milk pudding from a packet. Housemates C and B and boyfriend A eat cold frankfurters in plastic. Housemates D and E make porridge.
...

Day 5
04.17: A loud shriek is heard. Housemate D runs into kitchen, brandishing completed, sellotaped cardboard model. There is private rejoicing.
...
06.40: Two female housemates get up early and decide to do sit-ups. This sporadic burst of random insanity is never observed more than once in any Big Brother session.


Day 16
02.23: The housemates have now lost all concept of time. Polish winter has fallen and the exterior world is in perpetual darkness, with the exception of a twenty-minute period around lunchtime. Everyone looks at the floor. Someone has left a Coldplay CD playing on 'repeat'.

Day 18
No-one has seen housemates B and C since their Mechanical Economics exam 48 hours ago.

Day 19
Mid-term. Unfortunately, the housemates have failed in their Classic Mime task. Their food budget has been severely restricted. They are reduced to drinking Warka Mocna. The fridge is full of beer cans and free garlic pizza sauce.

Day 21
National holiday. The housemates go home for a week. The next door neighbours break in and use their electricity.

Day 28
The housemates have returned from their holidays to find a message under the door: Big Brother wants to see you in the Diary Room... at 9am...
Posted by pinolona 9 comments:

It was a damp, drizzly day in Edinburgh. The granite looked even greyer than normal. Sis was texting her boyfriend and I was checking shop façades for Fringe info.

We passed a church.

- Hang on a second: I'm just going in to check the line-up. I said.

I went in and asked the girl sitting behind a table which served as a makeshift box office.

- Sure you can see something: what time?
- Well... now, actually
- There're programmes just in there...

We went through to a room where they were apparently serving tea in the parish hall (not a vicar in sight though). There was a large hatch at one end where two students were perched eating Kitkats and prawn cocktail crisps.

- You know what? I said, emerging from the folds of the programme after several minutes - there is a play on now. And it's a comedy.

We wavered ever so slightly. Should we take a chance, watch a play on impulse, broaden our minds? Or walk on down to Princes Street, spend an hour in Accessorize touching the merchandise and then go for coffee?

- Come on, it's only forty-five minutes!

And that sealed the deal. Five pounds (three pounds fifty for a student) and a mere forty five minutes of our lives and we had not only 'done' the Fringe and improved our minds through culture but also successfully found a way of keeping ourselves occupied during that awkward hour when it's too early for teatime.

And that ought to be the end of this post.

Only... the play was called 'I hate everything'. And it was about all those annoying little things about modern life (like people who listen to their mobile phones on the bus and that tiresome guilty feeling you get when you walk past a tramp).

And you see... there are so many of them:

- When the supermarket cashier says 'I'm closing after him' and points to the guy standing in front of me. This almost exclusively happens to me in Poland (maybe because I'm not a British guy).

- People slightly older than my generation whining about not being able to get a mortgage because of the credit crunch. Aw diddums and welcome to our world. I'd love to shell out on a nice flat but sadly I've got to spend my earnings paying off student loans and funding state pensions for the baby boomer generation.

- Famous people who aren't really famous. It's terrifying that you can be away for just a year and a half and suddenly the magazine racks are full of unfamiliar faces. What on earth is the Dragon's Den? Am I really expected to keep track of all the wives and girlfriends of the England football squad along with their fluctuating body mass indexes? What did Kerry Katona actually do before she started making Asda commercials?

- Headlines in the Daily Mail and people who repeat them in the pub, not realising where they got the idea from. And Express 'campaigns' about issues you didn't even care about: 'Thanks to campaigning by Express readers, local post office/pub in Lower Minging is saved! Now the village's three elderly residents can queue up and complain again, just like in the good old days!'

- Women's fashion that makes you look pregnant. This includes everything at the moment. Who said the Empire line was a good look? And exactly when did the British female cease to have a waist?

- Yoghurt adverts aimed at women. Why do you never see guys talking about feeling bloated and tucking in to a pot of Activia?

- Hair straighteners. It's already straight. And it's just one more thing to worry that you've not switched off when you're already sitting on the bus.

- China winning all the gold medals. It's not fair, there are just more of them...
Posted by pinolona 3 comments:

The information age is upon us! Every minute, dozens of kilobytes and thousands of pixels of facts, figures and images are blasted into our brains via every sensory inroad! We learn more useless information in a day than our great-grandfathers learnt throughout the whole of their schooling!

Since when did the Whole of Britain become digital? How is it that the five (ok, four) main television channels are now simply animated billboards advertising digital pay-per-view? How can you pick your way through hundreds of sports programmes, dozens of film stations, entire 'man' channels dedicated to Top Gear and Have I Got News For You?

Just when did we become hooked on hours of channel-flipping? How is it that two humble AA batteries are all that stand between human sanity and four hours of the Jeremy Kyle show??

Let us rebel against the information age!! Long live the ear plug! Bring back eye-masks! Deny marketing and publicity! Revolt against digital channel-flipping!!


Editor's note: The author of this blog is at her sister's flat, and can't find the freebox remote.
Posted by pinolona No comments:

I'm in Germany.
The past few days have been packed with linguistic confusion.
From the moment the Pani (Frau?) at the bus stop (wo ist die bushaltestelle bitte?) asked me something and I answered: 'nie wiem... uh... no... crap... ich weiss nicht', I knew it would be disastrous.

It started out well. I bought a beautiful Berlitz phrase book and CD from Borders in Stansted airport (at 6.45am there's not even too much of a queue) and hit the books straight away. With a large cup of coffee.
By the time we landed at Frankfurt-Hahn, I was at least able to ask for a ticket to Saarbruecken. Not bad for a Friday morning. The ticket guy answered by giving me directions, and that's no problem: apart from anything else, it usually consists largely of gesticulation, and how can you go wrong with that?

The bus terminal at Saarbruecken Hauptbahnhof is extremely complicated, with buses in two lanes and trams down the middle (four 'platforms' in all).

I was there for over an hour.

It wasn't even a linguistic problem: I simply couldn't spot my bus (being woken up at 4am doesn't do much for my powers of observation).

Twice I saw the vehicle in question drawing in to land over on the other side of the bus station. I picked up suitcase, computer bag, handbag, waterbottle and passport and legged it across the tram tracks, narrowly missing falling over the steps in the middle platform.

I reached the other side just as it was pulling away.

The second time I made it, presented myself - rather out of breath - at the drivers' doorway, and gasped 'Jugendherberge bitte!'
- You have to go back to the other side.
... said the bus driver, in English.

After another half hour, another six or seven buses which were manifestly not for me, and the company of several different bus stop drunks, I gave up and headed for the taxi rank.

Three days later, my German is only slightly improved: I now know the following: