- Starts at very-early-o'clock in the morning: lots of students standing outside school eating pretend croissants by 7 Days. Several people nearly get left behind.
- Although our teacher instructs us very emphatically to stay awake and look out of the window, we all fall asleep almost as soon as the coach starts moving.
- There is approximately one public toilet in the whole of Małopolska.
- Someone spills orange juice on the coach and the driver goes ballistic, almost abandoning us in Biecz (wherever that is).
- It is fun to climb up bell-towers in wooden churches!
- It is not fun to eat only ice-cream all day and pee in a bush.
- Polish people who do guided tours of churches speak veryfastindeed.
- Predictably, when you visit a historic church, the caretaker will try to encourage you to get married there.
- Trying to find a place to eat in a group of eleven will take forever. Add an extra half-hour to forever for each additional person. 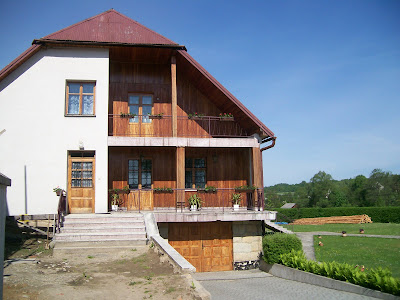 A Big Polish house, like what they build in the country. Looks as though it only has three levels instead of the customary four. 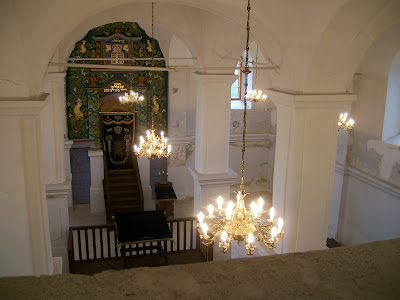 Inside the synagogue at Bobowa, former centre of Hassidic Jewish life, now a place of pilgrimage. 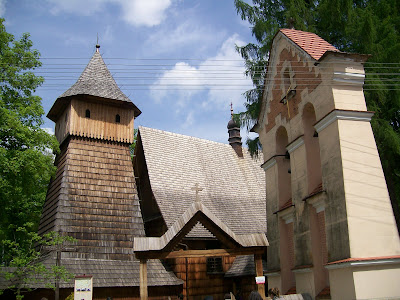 Wooden church of St Michael the Archangel in Binarowa, dating from about 1500. Gosh that's old. 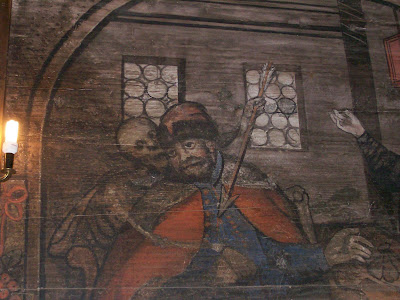 The paintings inside date from the 16th century 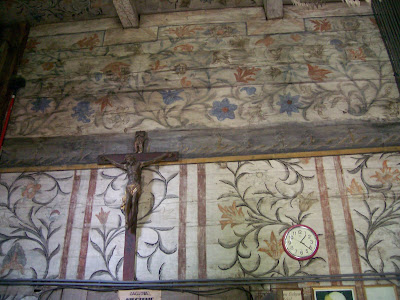 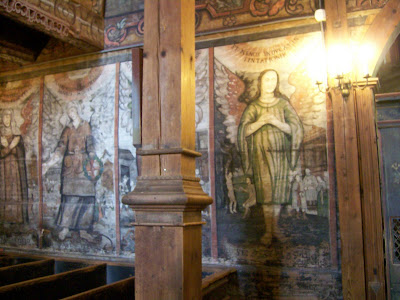 Painted interior of the church 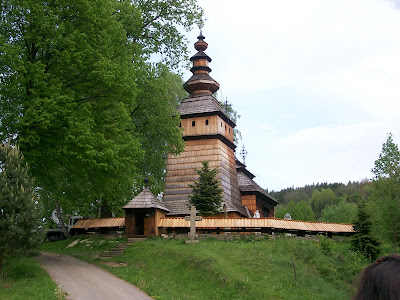 Cerkiew (Orthodox church) in Kwiaton, former settlement of the Lemkos or Rusyns (cue lots of angry comments from Real Łemkowie because I got it wrong again). Slavic cultural history is cool. 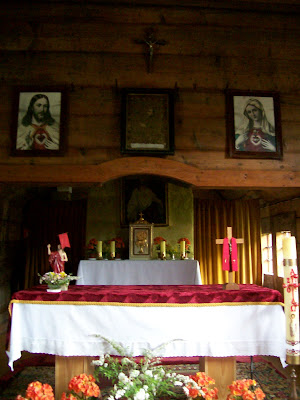 Inside the church - which smelt strongly of Ronseal wood preservative. Now re-consecrated as a Catholic church, since the original Eastern Orthodox congregations have long since moved on. 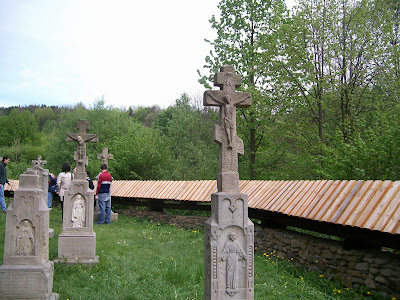 An Orthodox lapidarium - no actual graves, just the tombstones, which were rescued and restored. The Łemkowie and their families are long gone and the gravestones were rescued from various centres of Łemko or Rusyn culture and are currently undergoing restoration. The inscriptions are in Cyrillic and the language is apparently a cross between Ukrainian and Polish. It's fascinating. I wonder who they were, where they went, and where their descendants are now...

I do not know where the Lemkowie are now, but the Jews from Bobowa are now in Brooklyn New York :D

yes, I heard that - we saw videos of a Bobowa Hasidic wedding on YouTube.

That's why it's a place of pilgrimage: Hasidic Jews have to revisit the place their Rabbi came from. Or something like that.

ha ha, Now i know why there is a direct flight from Rzeszow to New York.

Makes sense, why not?!

So no-one has anything to say about disappeared Galician folk culture then?? :(

yes, I heard about Akcja Wisła. I shall read about it in more depth. Thanks.

Lemkos are more often Greek-Catholic than Orthodox, and the cerkiew in Kwiatoń used to be Greek-Catholic too, which means that the building belonged to Vatican anyway. Their rites, calendar and cerkiew are like in the Orthodox Church, but the Roman-Catholic pope is their boss, and in Polish their priest is called ‘ksiądz’ instead of ‘pop’. They have their dedicated metropolitan archbishop who reports directly to the pope. Święty Mikołaj is their patron of the lands, and is usually portrayed in the main row of the iconostas, on Mother Mary’s right. Unlike the majority of Roman-Catholic priests, the Greek-Catholic ones don’t have to live in celibacy, so the Church is very different in all possible ways, but it’s still Catholic and in communion with Rome. Roman Catholics can go to a Greek-Catholic mass on Sunday and it counts as their own. It’s also one of the reasons why communists didn’t like them, because the Orthodox Church sees them as dissenters. The Polish word Unici (Unites) that was commonly used in reference to them is used by Orthodox people in a derogatory way.

I’m not sure if you’re aware how it works. For example if today the Anglican Church went under the Roman-Catholic pope’s auspices they wouldn’t turn Roman-Catholics but rather would remain Anglicans within the Catholic Church. All the differences that aren’t on the doctrinal level would be kept. I.e. priests still could have wives, they could decide how the service is held, when one takes the sacrament etc, while the Roman-Catholic Church in England would work separately just as it does now. There would be two parallel administrations with two archbishops on the same level of significance. No Anglican would report to a Roman-Catholic bishop. It’s like one man (the pope) having two parallel companies rather than a subdivision of one company. The Greek-Catholic Church was created on such terms centuries ago during the Union of Brest.

After WWII their Church was banned and all their priests arrested, but the Roman-Catholic cardinal Wyszyński made it possible for Greek-Catholics to observe their rites clandestinely under his administration (so it was a kind of help to the sister company). Any official mention of it was forbidden, but in practice at least some of the former Greek-Catholic churches turned Roman-Catholic still held Greek-Catholic masses for believers, only that there weren’t many priests left. Those priests that remained had to become bi-ritual in order to pretend Roman-Catholics for all official purposes. In other words it was possible only to either convert to the Orthodox Church or keep being Greek-Catholic in the Roman-Catholic one clandestinely. They had to be trained in separate groups, because their rites differ so much. I.e. they need to know the cerkiew kind of singing that’s very different from the Latin rite. It diminished the number of Greek-Catholics in Poland, since they often had no place for worship, especially after they were expelled from their villages. In Beskid Niski there were announcements on the cerkiews’ door informing when a Greek-Catholic priest would come to hold a mass for them. It wasn’t every week, because one priest had many parishes. Their priests were persecuted throughout the communist period. Only in 1989 the Church was registered again.

The communist image of Lemko was that of murderer. There was an aggressive anti-Lemko propaganda, with crime novels issued about them and horrible stories published all over the press, i.e. how they return to their old houses and burn them down with the new tenants locked inside, or rape the tenants’ daughters and wives. A kind of modern witch-hunt, counted on creating a mixture of panic and prejudice.

Some Lemkos returned later and live in Beskid Niski now, many more didn't. The most popular Lemko among students fond of this area is Mr. Madzik who’d never refuse shelter to anyone, no matter how many people came to stay with him. If you're ever in Bartne he'll show you around; he keeps the cerkiew’s keys. Students used to volunteer to help to renovate the old cemeteries, and some Lemkos would admit to their ethnicity and tell them about their religion and customs. SKPB (student-guides for Beskidy) issued books with their songs. Today it’s nothing unusual, but back then one needed first to earn their trust, because they risked a lot.

They are very nice people of course, more hospitable than Poles. Open to strangers, which is a wonder if you consider their history, and their language is great. The alphabet differs from Russian, which doesn't help learning it either, and, back in the 1980s, they wouldn't speak it unless they thought no one from the outside could hear.

Andy Warhol was from a Greek-Catholic Lemko family, so there is a bit of the Galician culture in today’s popular culture.

Polish Boykos, who used to live in Bieszczady, are nearly extinct. I lately read that some still live somewhere in Poland, but I never met one and until then I always heard that no one left. Bieszczady became a depopulated space in the middle of Europe. If you ever go there, it’s considered the proper behaviour to use Boyko names of the villages instead of the new Polish ones (they’re written in italics on PTTK maps), so it’s Berehy or Krywe for example rather than Brzegi or Krzywe. It’s all Poles could do to protest against the ethnic cleansing and keep the memory of the people and their wiped out villages alive. All in all it’s a very sad post-WWII story, nearly unknown outside of Poland. It’s assumed that around 100,000 Lemkos might still live in Poland today, but with their population dispersed, and without the Church to hold them together, many might have lost their sense of ethnicity and culture. Only about 5,000 chose Lemko nationality in the nation poll.

But to not make it seem that they disappeared entirely here’s their portal http://www.lemkowyna.net/ You’ll like it, they use both the Cyrillic and Latin alphabets, so you can make comparisons to Polish.

Also, read this “I am From Nowhere: The People History Ignored” http://www.lemkowyna.net/index.php?option=content&task=view&id=974&Itemid=2 It seems to be in three languages at once, plus Lemko texts are in both Latin and Cyrillic alphabets, but it should be understandable. I.e. “Bilsze dribnyc na temu filmu v anhlyckym jazyku najdete za motuzkom.” seems to mean „Bliższe szczegóły o tym filmie w języku angielskim znajdziecie za odnośnikiem” (the last one is just a guess).

Sylwia, wow, thanks! That's very comprehensive. Thanks for the links too. You're right, I do appreciate the Lemkowyna site for the Polish language comparison :)
Thanks for picking me up on the Grecko-katolicki thing too - got a bit mixed up there and thought they were part of the Orthodox church.
Seriously, it's fascinating for me to hear about the history of the peoples who lived here. Bear in mind I've grown up in Britain learning Romance languages, so my idea of cultural history is very Roman-centric: looking beyond that is revelatory.

Excellent stuff, Sylwia! Thanks for bringing this region to your readership's attention Pinolona.

I'm increasingly convinced that "Sylwia" is in fact a branch of the Polish government dedicated to educating foreign bloggers.

Island1, not only foreign bloggers, but native readers too. I'm wondering, what does "Sylwia" stand for? It must be acronym...

No, Sylwia is just Lemko in origin!

Lemkos,Boikis and Hutsuls are White Croats,not Rusyns.This Rusyn is a product of russian imperial and later Soviet communist forgery.
Check on old maps in old chronicles,dialect similarity,costumes,almost identical to nowadays Croatian in republic of Croatia.

ah ha, another facet to this fascinating history!