I still have a good twenty-eight or so posts to get through by the end of the year. This is going to be tough. I feel a lot of photos coming on.

It's starting to get really cold in Brussels now. Not just ordinary cold, but damp, foggy cold that chills you through and through. The radiator in my bedroom doesn't work. I've heard that you need to bleed radiators. This sounds like one of those rather disgusting but secretly fun things - like picking scabs or pulling out hangnails - that you do as a child sitting cross-legged on a rather dusty floor waiting for assembly to start. I realise that's probably a rather over-detailed simile but I have a very, very clear image in my mind here of the boredom and the floating dust mites and those disgusting curtains decorated in a fetching pattern resembling psychodelic spools of Marmite. Once, I unzipped my summer dress all the way down the front and couldn't zip it up again. I was marched out of assembly and had to change into an abandoned dress from the spare clothes cupboard. My Mum never dressed me in zips again. What do you expect, giving a seven-year old easy access to zippable fashions?

I did tell the landlord about the faulty radiator and he sent round a plumber. When I say 'plumber', obviously I mean the landlord's sister's cousin's brother-in-law who's a bit handy with a spanner and used to watch Home Improvement quite a lot. The plumber stuck a little Allen key or something in the corner of the radiator, there was a loud, satisfying hiss and some water dripped out. I'm sure it's something I could do myself...

I also need to put blinds in upstairs. My flat has attic rooms with beautiful, big skylights, perfect for lying back on a snow-white cotton duvet and dreaming that you're floating on a cloud. Unfortunately, at three in the morning when there's a full moon they're not so good. Yesterday I snapped awake and lay in the chilly moonlight, trying to sink back into a lovely dream where I was catching up with an old friend who's recently moved back from Australia. The only thing is, it's not my flat. And I resent investing in something that I'm going to have to take down and paint over in three years time. The flat is definitely my home, but I still feel that I'm camping to some extent. The kitchen especially doesn't feel like mine (although it's miles better than the old place, which looked like this: 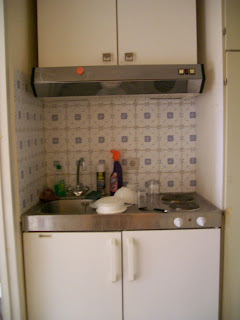 )
The new one is a definite improvement in that it has actual work surfaces. And more than two hobs (which I never use because I am lazy and useless and don't have a dining table yet and haven't found my local veggie market). And no cockroaches whatsoever.
Note the tasteful tiling in my old kitchen. I have to admit I probably failed to appreciate its full splendour, largely because I was utterly bedazzled by the subtle charms of the bathroom: 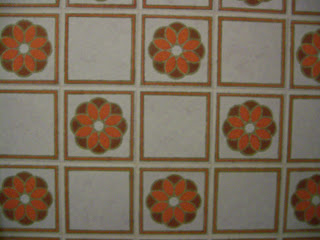 Now, I've commented on the weather, written something vaguely amusing about my childhood, given you an update on the flat and some photos of real estate failures past. That's my blogging duty over for the day, bonne nuit!
Oh wait. Polski update. Uh. I have one lesson a week with a very patient Polish lady and we are going through a fascinating textbook on economics. I am also trying - and failing - to remember the difference between siedzieć komuś na głowie and zawracać komuś głowę, and many other such expressions, also from a textbook.
On a fairly regular basis, I bump into a Polish person at a party and have a long and apparently fluent conversation with them which in reality probably consists of:
- oh wow, you speak such great Polish!
- thanks, I make lots mistakes. I live in Kraków two year.
- How did you learn?
- I go language school and then UJ, Cen-tre foooorrrr Po-lish langu-age and cul-ture iiiiin theeee world (I have to say that very carefully otherwise I get the endings wrong)
...etc, etc, for another half-hour or so. But it all sounds a lot better after vodka.
Posted by pinolona

Yes they do. I always feel hugely self-conscious speaking a foreign language, I think everyone does. But I like to practice :)

I always find that because I say the words "I don't speak much Polish because I am English, can you help?" word perfect and without accent, people I speak to always assume I'm just being shy and am actually fluent. It's amazing how many facial gestures you can use to make it clear you have no idea what someone is talking about!

Two things. First of all, any house without cockroaches is awesome. I learned this by living in houses with cockroaches for 5 years. Second, that's called a radiator bleeding key. To learn more, watch the slightly annoying Michael McIntyre talking about the 'man drawer' on youtube.

omigod. I have a man drawer - well sort of a feminine equivalent - at my parents' house. My Mum puts stuff in it as well. It mostly contains spare buttons from items of clothing we no longer possess, washing instructions for the same, incomplete sewing kits from German guesthouses, old nail clippers that don't work and odd bits of foreign currency.

Aidan, I hear you: I spent a year living with cockroaches. Not good. Not good at all.

The story about your school dress made me literally LOL. I actually snorted. I was once playing with one of those plastic Alice band thingies in assembly, when it snapped. The headmistress called me up in front of the whole school and I cried. Ah, the joys of an English childhood.

For the veggies: Flagey on Sat & Sun mornings. I actually have a book listing all the markets in Brussels. I pretend it's to practice my French, really I'm just a market perv.

Laura, I am still slightly concerned it may happen again (it already has with a zip-fastened cardigan) and for this reason I've never bought a dress with a zip down the front.

It sure is getting cold. I'm shocked every time I open the door.

I don't think I've ever used more than one hob on my stove. I'm a one pot kind of girl.