My love affair with all things Polish began in 2005, on a university choir tour to Kraków. Actually it was around the beginning of April 2005. The weekend after Easter. I wouldn't normally remember the date of a student trip, only this one was a little different, and not just because we brought winter vomiting flu to Luton airport (that, I feel, is a story for another time).
While we were in Kraków, at the end of March 2005, an elderly Polish gentleman (whose parents are buried in the Rakowicki cemetary in Kraków) lay dying in hospital. This elderly Polish gentleman was also known as Pope John Paul II, and, while we were enjoying the bright spring sunshine in the Planty, all of Poland (or at least all of Kraków) was out in the streets keeping watch for him and lighting candles. There are a lot of things about Polish Catholicism that make me uncomfortable, but one thing that I find striking in a positive way is its emotional side. That week in spring 2005, I and several other of the choir's excitable Catholics (and non-Catholics) went to kneel in Kościół Mariacki at one o'clock in the morning, stood outside what I now know to be the famous window on ul. Franciszkańska, lit candles and held hands with Polish strangers in the middle of the night and listened to them singing with tears streaming down their faces.

I was enchanted by a people that would go out on the streets to pay their respects to a man they may never have met, but who none the less was a son of their city. Leaving aside a budding fascination (or at least the sense of a challenge) with the language, my lasting impression was of a beautiful city flooded with cool, sharp sunshine and, by night, of people keeping watch and praying in the street.

Strangely - and possibly hypocritically - I feel cynical about patriotism and public displays of emotion in the UK, while in Poland I find it moving.

On the eve of All Saint's Day in 2007, I visited the Rakowicki cemetery and saw the lamps crowding the memorials and lighting up the darkness of the graveyard. I learnt that even empty plots are sometimes given lamps because no grave should be left out and it's a collective responsibility to make sure that no-one is forgotten.
When I was home for Easter last weekend, my Mum told me that she went to look for her father's grave and was upset that she couldn't find it: more plots had been added and the landscape had changed. Maybe we just have other ways to remember people and to pay our respects. Maybe not. I would like there to be lamps though.

By Saturday afternoon there were already flowers and candles outside the Polish Embassy. When I came back later in the evening, lamps were burning and there was a crowd of people standing outside keeping vigil. More flowers were there today.
Politically I was not a big fan of Kaczyński but no-one deserves to go like this; a lot of people died in the plane crash and it's especially awful that among them were representatives of the Katyń families, who have already suffered more than enough.
Incidentally, there are books of condolence at the Embassy if you live in Brussels and want to pay your respects. The doors are open from 9am until 5pm, until Saturday. 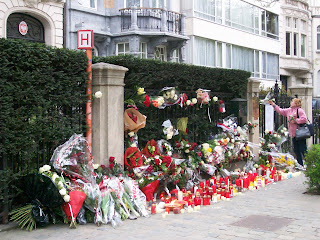 Not a great photo because I felt a little disrespectful taking pictures, but Polish mourners were (very discreetly) snapping away as well so I thought it was probably ok.
Posted by pinolona

Tricky area, this patriotism thing. English patriotism, you're right: scary, creepy stuff. American: I freeze, pull away, hide.
Despite my funny name, only bits of me are actually Polish, and I only lived there during my childhood, but I carry a strong bond and cultural connection to the place, which I now accept as a permanent installation in my psyche.
I'm always amazed at people's reaction to Poland. Those who have never visited are often negative. Those who have been there fall into a kind of thrall, which I can't quite connect to. My wife and daughter (Americans both) are cases of this sort. They have mythologized Polish stuff to where I have to calm them down, not a role I normally play.

I think some aspects I have 'mythologised': it's easy to become enchanted with customs that are not your own. However, I have plenty of gripes with Poland, as many of the posts written in 2007/2008 (when I first arrived) will probably show...
Actually I felt really sorry about the crash because of its connection to Katyn and I wanted to write something nice to show sympathy. Now I realise I'm probably being a bit over-effusive...