Are you being served?

One - pretty important - thing I haven't mentioned yet is Belgian Customer Service.

Now please, bear in mind I've just spent the past two years (more or less) living in a former Eastern Bloc country. While cities such as Kraków are very modern and Central European and sophisticated, they still have their fair share of grumpy old Panie Nie Ma, glaring protectively over their hoards of small change in those little post-Communist Sklepy Spożywcze with the green bars on the windows.

I really thought that Belgium, with its Mutualités and its cycle lanes and 'journées sans voitures' and general touchy-feelyness might be a little different.

What a fool I was. Let's not mention the pharmacies that insist on selling you a packet of ten capsules when all you need is one (without social security- still waiting - that's pretty steep). Or the Belgacom shopkeeper whose sales pitch I had to draw out of him, step by painful step (- no, I mean, couldn't you tell me the advantages of Belgacom over Clearwire? Is it more... uh... reliable, for example? Yes?).

No, I'm afraid this last episode has finally convinced me that Belgian customer service is officially The Worst In Europe.

I needed an ironing board.
Perhaps it is not entirely to my credit that it has taken me over a month to come to this conclusion.

Not having an awful lot of time at my disposal, I preferred not to waste it tramping the desolate backstreets of Etterbeek during daytime tv hours, so I looked up the number of the big(ger) Carrefour online.

I would clearly have to leave the flat after all.

I braved the drizzle and stepped out into the greyness...

***
This was a much bigger Carrefour than the little local round the corner, full of exciting things (toasters made in China, shiny plastic kettles from Romania). After some effort, I found the domestic appliances section.

No ironing boards. The price tag was still on the shelf though.

I made my way to the customer services desk, where a stout woman in an overall was slumped on a high chair at one of those supervisor stations.

- Excuse me... there aren't any ironing boards on the shelf - do you have any in stock?
The woman raised her eyes - not without some effort - from her magazine.
- If it's not on the shelf, then we don't have it.
I tried again.
- Couldn't you ask? Please?
Sighing, she picked up the phone.
- He's coming.
She said, and - sitting back dismissively - opened her magazine, leaving me standing there speechless in front of her.

If I had dared to pull that trick as a sixth-former on a summer job in Sainsbury's, they'd have flayed me alive.

I faked a text message and took a picture: 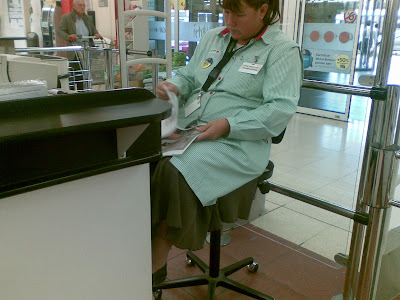 My phone let out a resounding 'click', but if Pani Sprzedawczyni noticed, she gave no sign of caring.

So here it is ladies and gentlemen: pictorial evidence that Belgian Customer Service is officially The Worst In Europe.

For the record, a guy in overalls then appeared from the warehouse, led me back to the rayon planches a repasser and - very kindly - went back into the warehouse to check whether the new delivery had arrived yet. It had, and as a result I had a lot of fun trying to manoeuvre my new purchase to the self-scan checkout without upsetting any pyramids of baked beans (here? as if!) or braining any under-fives.
Posted by pinolona

Email ThisBlogThis!Share to TwitterShare to FacebookShare to Pinterest
Labels: Belgian customer service is the Worst In Europe, Belgium, Brussels, Carrefour, shopping and eating

Maybe she was from the former Eastern bloc :)
Ok, just kidding, Belgians too have their right to be not consumer-friendly.

no they don't!! Don't defend them!

No wonder things are expensive if someone is paying her to do nothing except read a magasine. Bad management is at fault.

Well... Belgium is such a heavily unionized country that management would have a really hard time firing her, even if it wanted to. But they are probably just reading magazines in their offices and don't care either ;)

And you should have checked Lidl! I saw ironing boards there the other day...

Hazard is hazard? If you want sth per hazard - you have got hazard! :D (It will be or it will be not!)

Anon, are you French? In which case, can you explain what you are trying to say in French please? Cos don't get me wrong, I love corrections from native speakers and I'm aware that my French is not so hot but I don't understand what you mean when you write in English :)

Well, EU is getting more and more "communistic". And some day it will be like in old good Poland:
"czy się stoi, czy się leży - tysiąc złotych się należy"
Our experience is one of the reasons, why people here are more against eurocracy than western societies...

Oh I do love this one - the pic itself is a gem and deserves a place in the Musee des Beaux Arts.

NEVER have I seen such uselessness in Poland's private sector.

Nice to see skills such as "spot the lazy bitch" are transferable.

Enjoy Belgium. Try not to get too bored.

I take offence at your describing the woman as "stout". Must I remind you that women are not objects and should be judged by their personality and intellect, rather than by their looks?

I am very sorry that you are unable to look past her stoutness (or is it stoutiness?) and see the important qualities in her.

Honestly, people can be so shallow sometimes...

Peixote - you are right: if she'd been nice to me I'd have described her as 'plump' and probably 'jolly' as well, which have much pleasanter connotations. I admit that I am not immune to judgement by appearance.

But I am however realistic and my decision to describe the outward appearance of this particular person reflects the shiny, image-based world of customer service...